US Corporations Must Choose: Save Democracy or Empower Fascism?

Since the Republican Party now adheres more to tribalism, cultism, and nativism than conservatism, US corporations must choose which direction they want to take the country. Do they want a democratic nation or a fascist one that only racist white Anglo-Saxon Protestants control for all ages? And for those CEO’s who see benefits in fascism helping their goals of unfettered access and influence, may I remind them that this country’s January 6 insurrection is the result of deep and all-encompassing anger on main streets across this nation. It is a fury that will impact capitalism if we cannot find the right combinations of valves to release it.

Those valves are not religious based, as would the Anglo-Saxon Protestant movement of Donald Trump, would have you believe. They are all economical, which only a democratic system can cure.

Having said that, let us analyze Trump’s motives and choices of uniting the white Anglo-Saxon Protestants to rise to power again. Do facts back him? If not, what might his agenda be for the country?

According to an ABC/Washington Post poll conducted in 2018, only 36% of the population identified as affiliated with a Protestant denomination.

Trump is waging a losing battle of a Protestant movement for which former President George W. Bush flagged him for it when he said in a podcast interview:

if the Republican Party stands for exclusivity — you know, it used to be country clubs, now evidently it’s White Anglo-Saxon Protestantism — then it’s not going to win anything.Former President George W. Bush - May 3, 2021

In 2019, Pew Research own poll found that Protestants account for 43% of all denominations in the U.S. But the same research also found a considerable drop in church attendance and affiliation.

The chart below clearly shows that less than 50% of the Millennials, now the biggest voting bloc, identify with any religious affiliation. Religiosity, in general, is on the decline in the U.S. 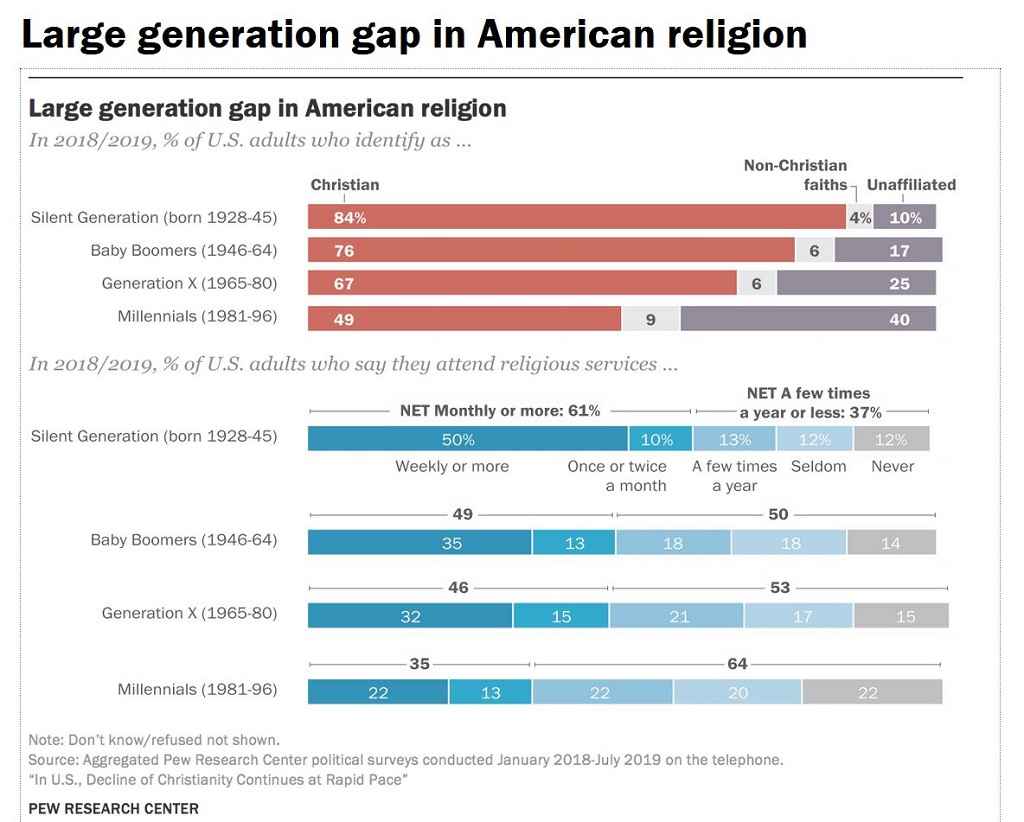 The Trump Protestant movement is bound to fail as numbers show. This explains the difference between politicians like Rep. Liz Cheney and Senator Mitt Romney whose anti-Trump positions have not only demonstrated valor, but also a visionary angle. They know that an Anglo-Saxon Protestant movement, even if it gets some conservative Catholic support, is not the future.

Notice the deafening silence of the Tea Party even with all the trillions in additional national debt.

The question to ask is why Donald Trump is pursuing a strategy that has no future. The sustainability of such movement is precariously doubtful at best, which former President george W. Bush indicated in his interview.

The answer is in the title of this article.

It matters little what support you have on the ground if your aim is to muscle your way into a democracy, just as Adolph Hitler muscled his way into the Weimar government in January of 1933 even though his political party held minority seats in the government. Once when and if Trump is back, he will declare martial law to combat a domestic enemy he has already invented in Antifa. But unlike the ascent of Hitler in 1933, mostly because of a stagnating German economy, President Joe Biden is spending trillions to shore-up the US economy to pull the rug from under Trump.

How could Trump come back? When US Corporations empower his extremist policies by funding the legislators that supported the January 6 insurrection. It’s that simple.

The X factor in all of this is what will US Corporations do next elections cycle. US Corporations must choose. Will they keep funding the Trump camp of extremist legislators, or will they reinforce our democratic institutions by turning their back on fascism?

Meanwhile, President Biden is confident his spending spree will have an impact on corralling even the Trump supporters. Notice the deafening silence of the Tea Party with all the trillions in additional national debt. This is a clear sign of approval by a population, Protestant or not, tired of feeling like second-class citizens in the richest country in the world.

US Corporations Must Choose: Save Democracy or Empower Fascism?