By switching her allegiance to the roll call of an Independent, vampire Kyrsten Sinema strikes again her own constituents who voted her into the Senate by turning her back on all of them to serve her very own narrow interests. To hell with serving their needs, she concluded. Now that I got here, I am staying put whether they like me or not. That’s the message Sinema sent the political establishment by switching allegiance two years before her next re-election campaign.

Sinema is now an Independent, just like Senator Bernie Sanders, but with the twisted goal of backing big pharma and financial institutions who could care less about the welfare of working Arizonians. In doing so, Sinema has established a template by which any Senator in the future can also turn their back on their own constituents and threaten the establishment of vote splitting the ticket three-ways to retain their seats against the will of the people.

Way to go Kyrsten Sinema. Your despicable behavior has become a roadmap for others to follow.

The vampire knows how to draw blood to remain a Senator against the will of those who voted her into office.

THE ESSENCE OF DESPICABLE

By switching to Independent, she is making it hard for Democrats not to support her as such would split the votes of Arizonians three ways paving the way for a Republican to win the state in 2024. Not satisfied with voting often against a democratic agenda, Sinema has decided that her loyalties really lie with Kyrsten and Kyrsten alone. Her poll numbers have tanked to a favorable rating of 37%, which makes her re-election almost impossible. By switching, she is in reality blackmailing the DNC.

The vampire knows how to draw blood to remain a Senator against the will of those who voted her into office. Her despicable move is her insurance against the Democrats in Arizona voting her out.

Here at Punditry, we are not a fan of Kyrsten Sinema because unlike other politicians who play well the hide and seek game with voters, Sinema cannot hide her contempt for her constituents as she presses on backing those who pay her the most to remain in the Senate. It’s all about her own self-interests and state and country can just take a number.

Her polling data are tanking because of her selfishness.

Kyrsten Sinema is the essence of despicable. She wants the power without the responsibilities to her constituents that come with the job.

Sinema, to appease Senate Majority Leader Chuck Schumer, stated categorically that she expects to vote with the Democrats in the next two years and would like to hold on to her committee assignments. If you believe she will do that, then Santa Claus has a gift for you.

The vampire cannot wait to find a way to side with the Republican Senators she has grown to admire over the last few years for their lack of humanity when it comes to protecting the interests of all Americans.

Kyrsten Sinema is the essence of despicable. She wants the power without the responsibilities to her constituents that come with the job, and this explains why she is oscillating into her make believe imagination that she deserves to be a Senator, which accords her the right to flee her voters.

We say let us boot her out of the Senate in 2024. There will be lots of money pouring into the campaign for her seat whose aim will be only to unseat her.

The DNC must not shy away from her challenge to back a real democratic candidate in 2024 even if that means a Republican might win the state. This kind of blackmail will attract other blackmailers in the future who, when they fail their constituents, will also switch allegiance in the hope the DNC co-exists with their strategy of blackmail.

There is also a good chance that lacking the support of a vast political machine, Sinema may struggle to find the funds to run an effective campaign. And since Arizonians see in her as the traitor that she is, it will be hard for her to come across as anything but the small and selfish woman that she is whose center of gravity is her own self and not her responsibilities as a representative of her own voters.

We say let us boot her out of the Senate in 2024. There will be lots of money pouring into the campaign for her seat whose aim will be only to unseat her.

Read More
We all know that politicians lie. In fact, that’s what they do best. But there is lying to…
Read More 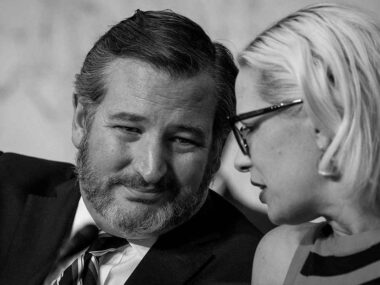 Read More
In the beginning, everyone knew where Kyrsten Sinema stood on issues. Then, once she got close to Senator…
Read More

Read More
Since the 70’s, the United States has elected two cruel US Presidents in Richard Nixon and Donald Trump,…
Read More