Which Corporations Are Funding the Seditionists?

It is never easy or wise to call for the boycott of businesses. But in the case of what transpired on January 6 and the role big business is playing in pouring money into the coffers of those who stood by when the Capitol experienced an attack by domestic terrorists, boycotting these businesses is the least we can do because it is an act that saves our democracy. We cannot let big corporations run amok with their millions, which undermines our own government. Which corporations are funding the seditionists to make another run at our democracy? Here is a list of corporate names to boycott.

A pressure campaign that Citizens for Ethics (CREW) ran against Toyota yielded some positive results. The giant Japanese corporation has decided to stop all political donations to the 147 members of Congress who voted against the certification of the elections. This is a big step forward.

In the wake of the Capitol insurrection on January 6th, nearly two hundred corporations and industry groups said they would pause or altogether stop making political contributions to the 147 members of Congress who voted against certifying the election … Many have failed this test, some reneging on a promise to change their giving while others made no commitment and are giving like nothing ever happened. By continuing to fund members of Congress who would undermine American democracy, these corporations and industry groups are sacrificing democratic government for access and influence.CREW - June 23, 2021

While Toyota has yielded, hundreds of large corporate entities continue giving money to the 147 seditionists in Congress who, unlike the gullible Trump voter, know well the elections were never fraudulent. They know that Biden won by a landslide.

Meanwhile, Trump is unhinged as he refuses, just like the psychopath that he is, to accept defeat. It goes to show just how deranged and demented he has become. What do psychiatrists call those who cannot accept reality? Incorrigible narcissists.

WHICH CORPORATIONS ARE FUNDING THE SEDITIONISTS?

So who are these corporations that keep funding the treasonous 147 members of Congress? Below is the list CREW published on their website. 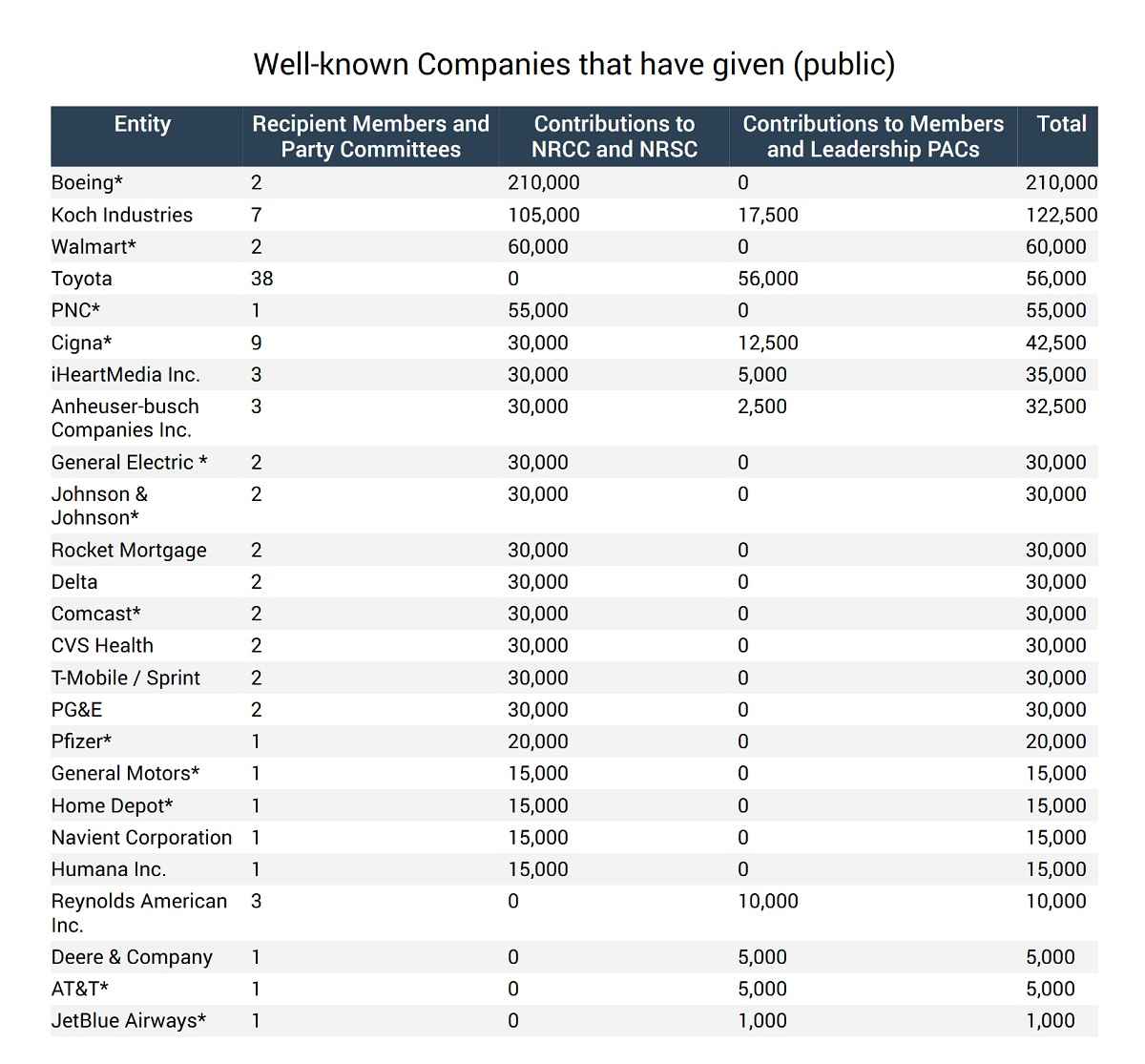 In reality, Americans have as much power in this s-called democracy as a discarded sardine can. The real power rests with corporations and billionaires who fund Congress. In return, Congress writes the laws that suit them forgetting that they work primarily for the voters. Folks, ours is fake democracy.

Considering how young our country is, we are going through the pains of our teenage years. In other words, we like democracy, but we are not yet fully democratic because of the influence of corporate America. Just like a teenager likes to party, but they must abide by the rules their parents set (i.e. corporate America).

That does not mean we can not boycott these businesses above in order to fix the aberration in our system of government.

In the case of the Koch brothers, which are the worst offenders in terms of killing any chance for our democracy to mature, their enterprise is a B2B that sells to other businesses. It is incumbent on those who make purchasing decisions, if they want our country to survive and prosper, to buy from other than the Koch brothers sources.

The Koch brothers are the ones who bought Senator Joe Manchin, and the Senator is blocking the For the People Act, a law that protects our rights as voters.

Koch Industries could care less if we become a fascist country.

Which Corporations Are Funding the Seditionists?